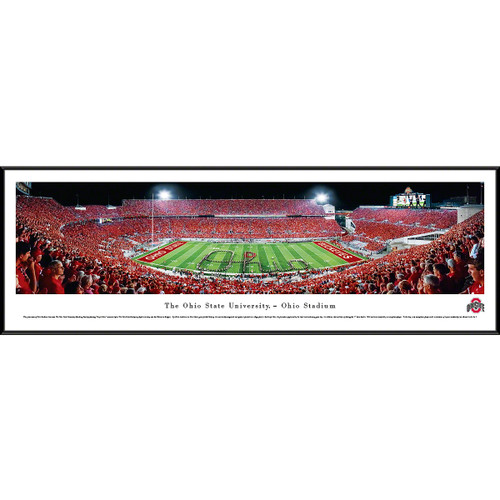 Frame measures 40.25 inches by 13.75 inches. Tempered glass. High quality black aluminium frame. Drop ships from the manufacturer shipping and handling charge of $19.99. The caption reads: This panorama of Ohio Stadium showcases The Ohio State University Marching Band performing 'Script Ohio,' moments before The Ohio State Buckeyes played to victory over the Wisconsin Badgers. Of all the traditions in Ohio State's great football history, the most widely recognized and greatest spectacle in college sprorts is the Script Ohio, the formation performed by the band each and every game day. In addition, the tradition of dotting the 'I' dates back to 1936 and was invented by a sousaphone player. To this day, only sousaphone players with a minimum of 4 years membership are allowed to dot the I.